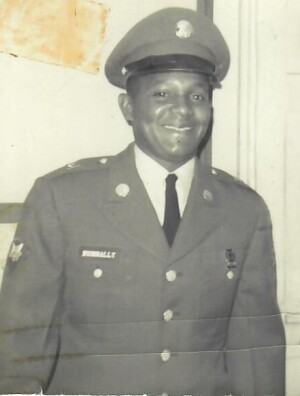 Robert Earl "Bobby" Nunnally Sr., passed on to his eternal reward on June 7, 2022. He was born on May 26, 1939, to Wallace H. Nunnally and Mabel M. Nunnally in Prince Edward County. Bobby spent much of his life in Prince Edward County and graduated from R. R. Moton High School in 1959. He accepted Christ at an early age and was a member of High Rock Baptist Church in Rice VA, until called home. He united in marriage to his lifelong love, Mary Jane Clark on August 5, 1962, and to that union, three children were born (Robert Jr., Kevin, and Angela).

Bobby was drafted into the U.S. Army on March 5, 1963, serving honorably during the Korean conflict until 1965 and as a reservist until March 1969.He was a very diligent worker, whether farming, serving as a delivery driver for Home Furniture Co., working as a custodian with Piedmont Geriatric Hospital or driving a school bus for Prince Edward County schools. Bobby was a quiet man but enjoyed a little “good-natured teasing.” He also was very skilled with building and fixing things. He was a devoted husband, father, grandfather, great-grandfather, brother, and friend to those that knew him.

Bobby is preceded in death by his son Kevin Michael, his parents and one brother Vance. He is survived by his wife, Mary, whom he had been married to for almost 60 years, his son Robert Jr. (Wendy), his daughter Angela Savage (Kevin), five grandchildren: Trevon (Kimberly), Rashaun, Kristen, Jaeden, Kiana, one great-granddaughter Chanel, one sister Shirley Earley (Vincent), three brothers: Roy, Charles (Vivian), and Melvin, one additional brother-in-law (Walter), three additional sisters-in-law (Annie, Rosetta, Virginia), two aunts: Callie Jenkins and Pearl Anderson and a host of nieces, nephews, cousins, other family members and friends.

Special thanks to John Sherif and the staff of Compassionate Homecare and the staff at Vitas Healthcare for the care and support provided to our family.

To send flowers to the family or plant a tree in memory of Robert Earl Nunnally, Sr., please visit our floral store.

A Memorial Tree was planted for Robert