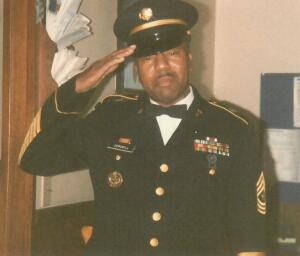 Robert Mack Cordell, Sr. ascended peacefully to his beloved Jesus early Friday morning February 18, 2022. His son was by his side. Our father, Robert was born in Farmville, Virginia on October 17, 1937 to the late Lenora Morton and Paul DeForest Cordell. He graduated from R.R. Moton High School and joined the ARMY shortly after. It was during his assignment to Fort Lee that he found his current church home and site to build his retirement “Ponderosa” in Chesterfield. On July 8, 1961 he married “the one that almost got away”, Gladys Lorine Miller and this 60 years union was blessed with 3 children. Tuwana, Robert, Jr. and Kimberly.

During his Army career he was known as Bob or Sarge to most and traveled abroad and stateside. Some of his destinations were Vietnam, Korea, Germany, Texas, Georgia, Kentucky, Washington D.C. and other posts in Virginia. He loved Ford Mustangs and has owned several, but the first car he dreamed of and drew freehand was a ‘69 Plymouth GTX. He taught me (Tuwana) how to drive in that one. We were a “Dog Lovers” family and had many German Shepherds, but his favorite was a Rottweiler named Astor.

Robert was quiet until he started talking. Our Father was a giving, spiritual man. 30 years of Military good mornings was a hard habit to break. We were awakened every weekend….loudly. “Half the day is gone!” His hobbies were fishing and gardening. He was an avid bowler and was always on a team. But most importantly, church every Sunday. Our Father, Robert was predeceased by his parents Paul and Lenora Cordell, his beloved Gladys ((wife), Elisabeth Ross (sister) and DeCarlos T. Langhorne (grandson).

To send flowers to the family or plant a tree in memory of SGM Robert Mack Cordell, Sr., please visit our floral store.